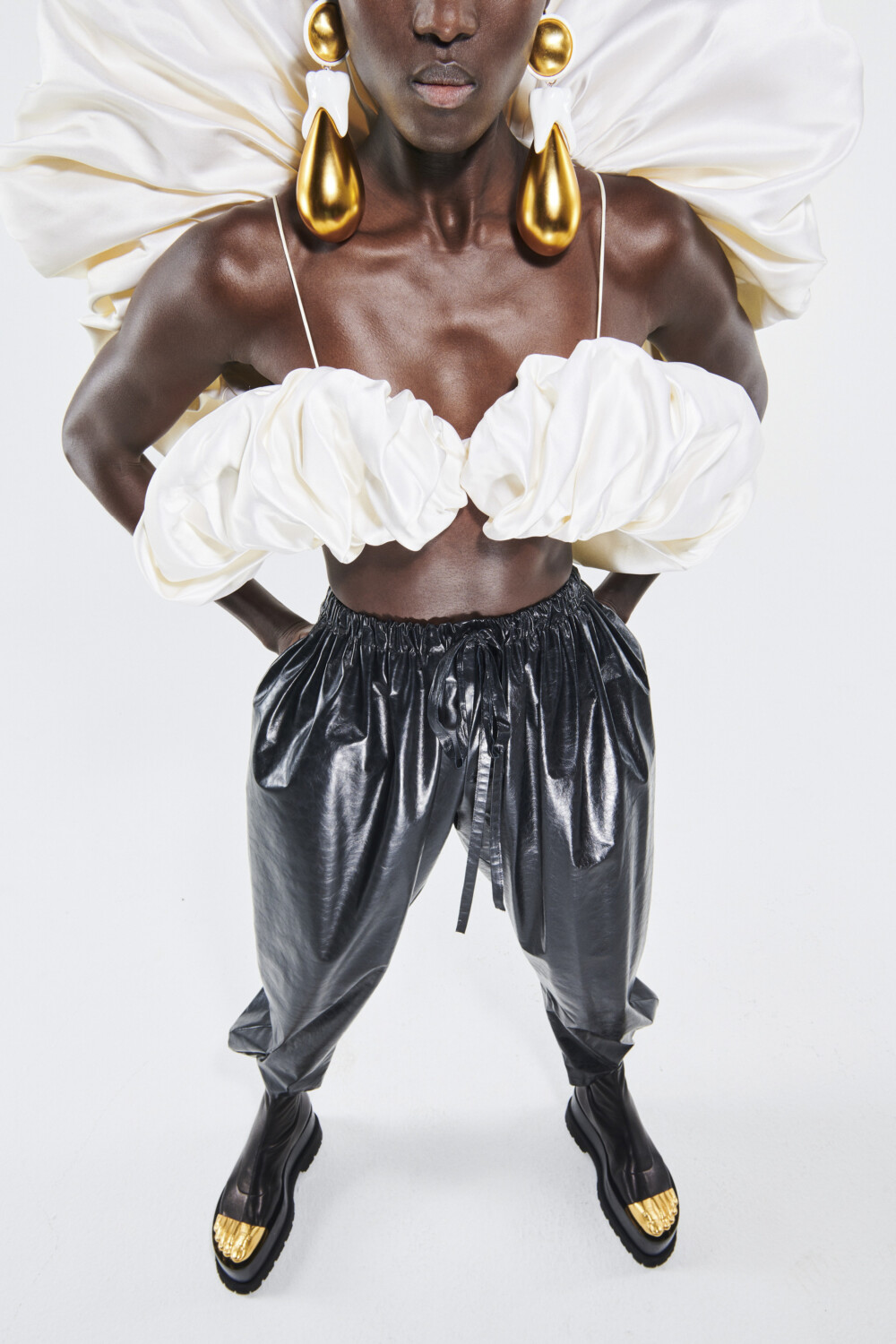 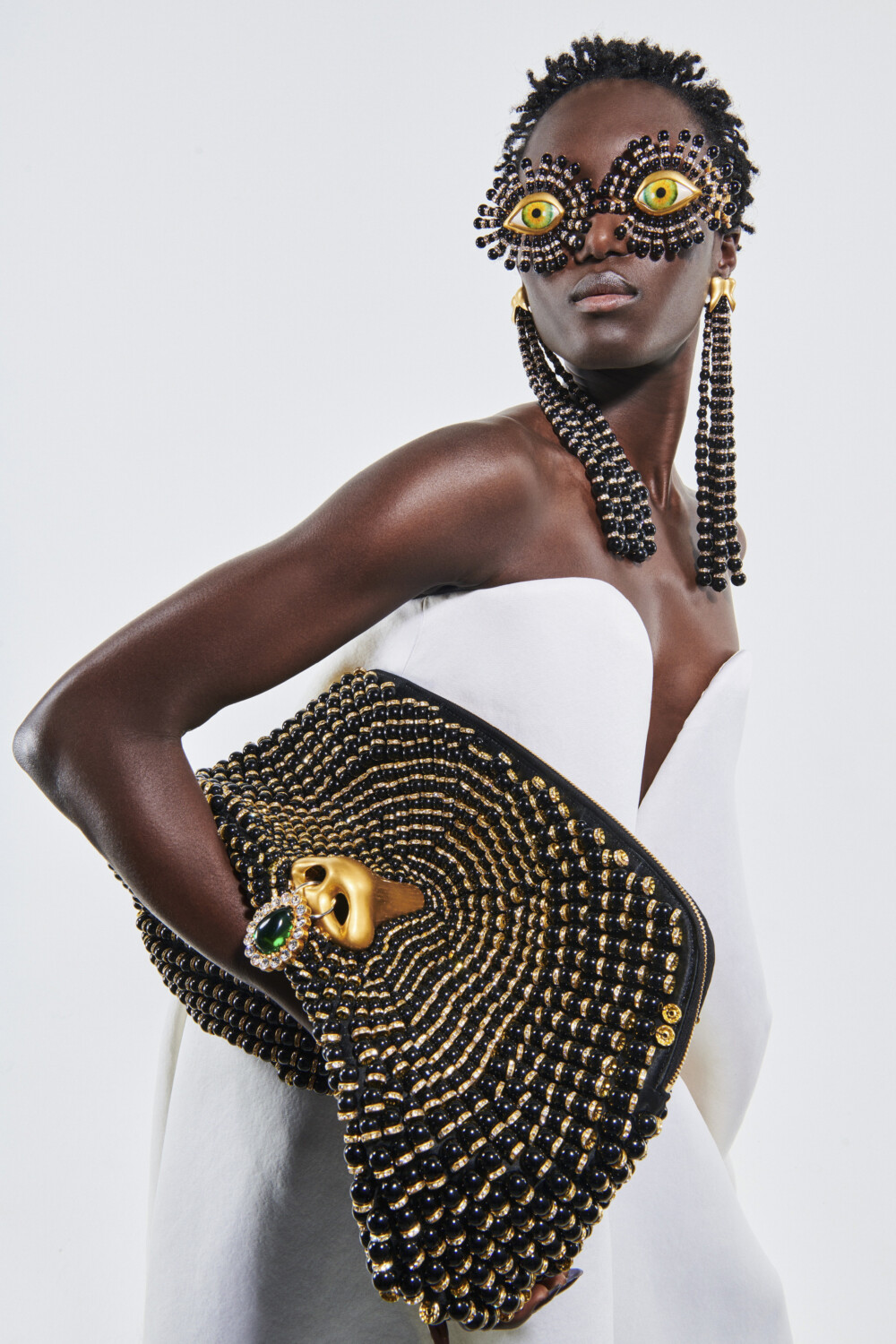 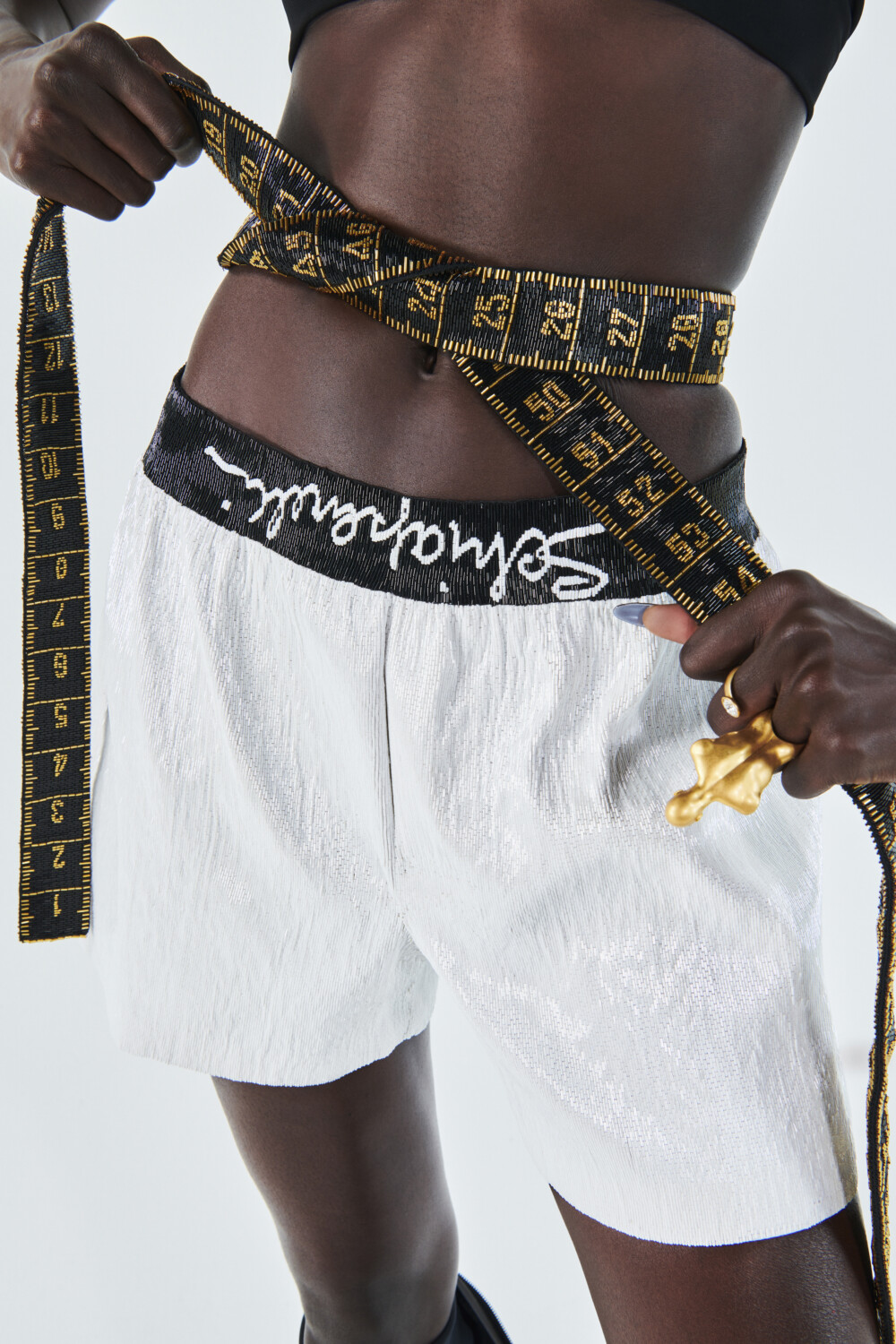 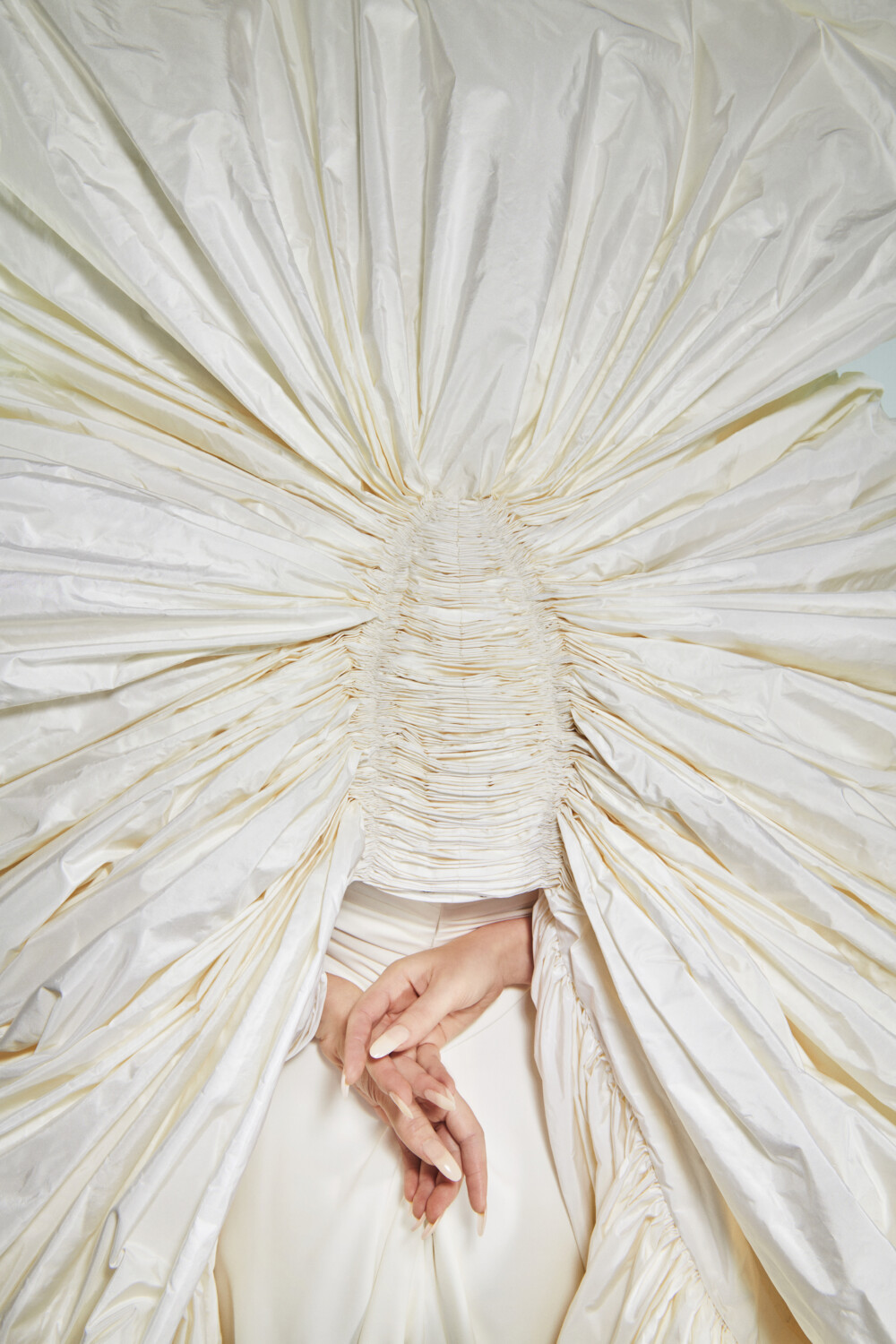 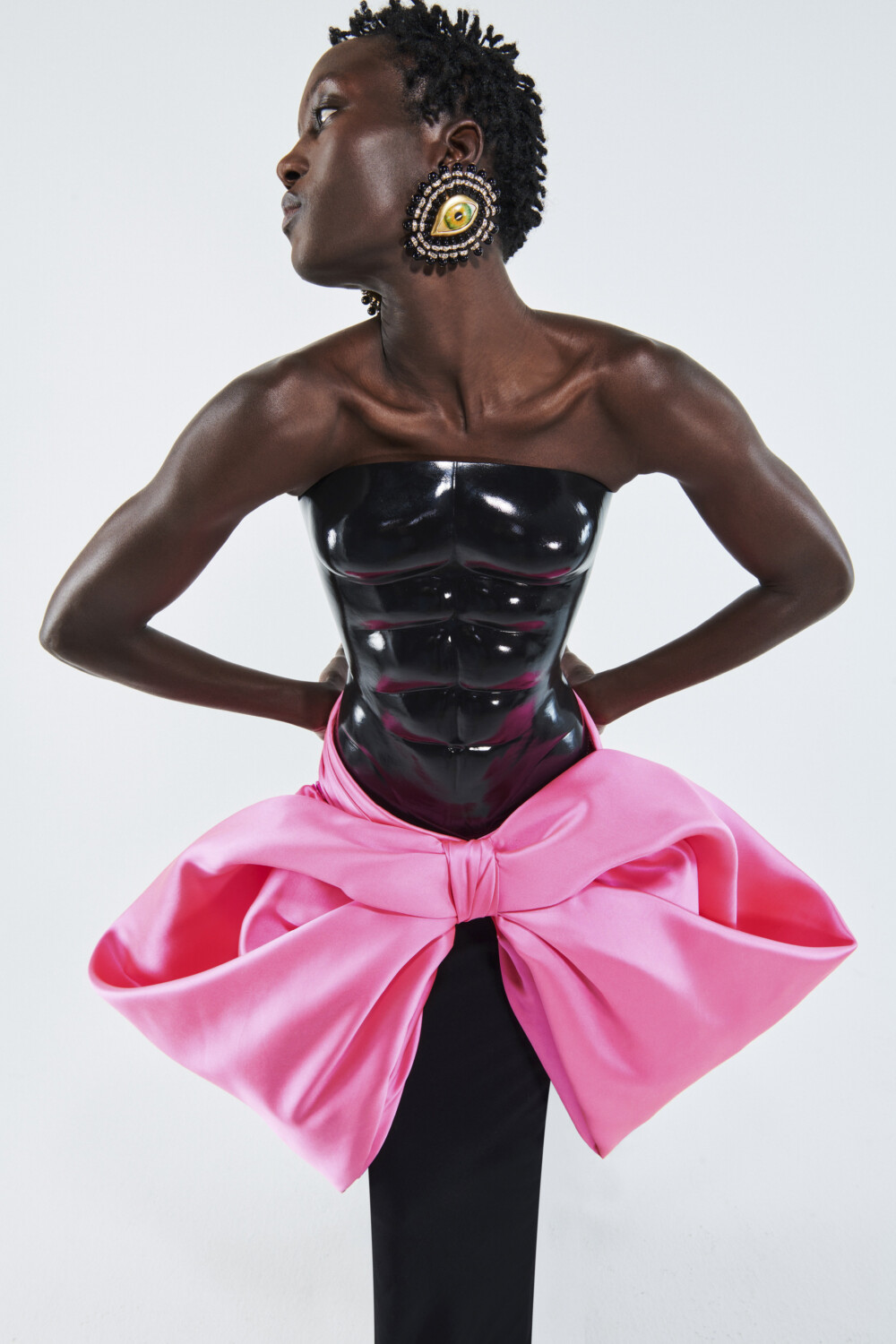 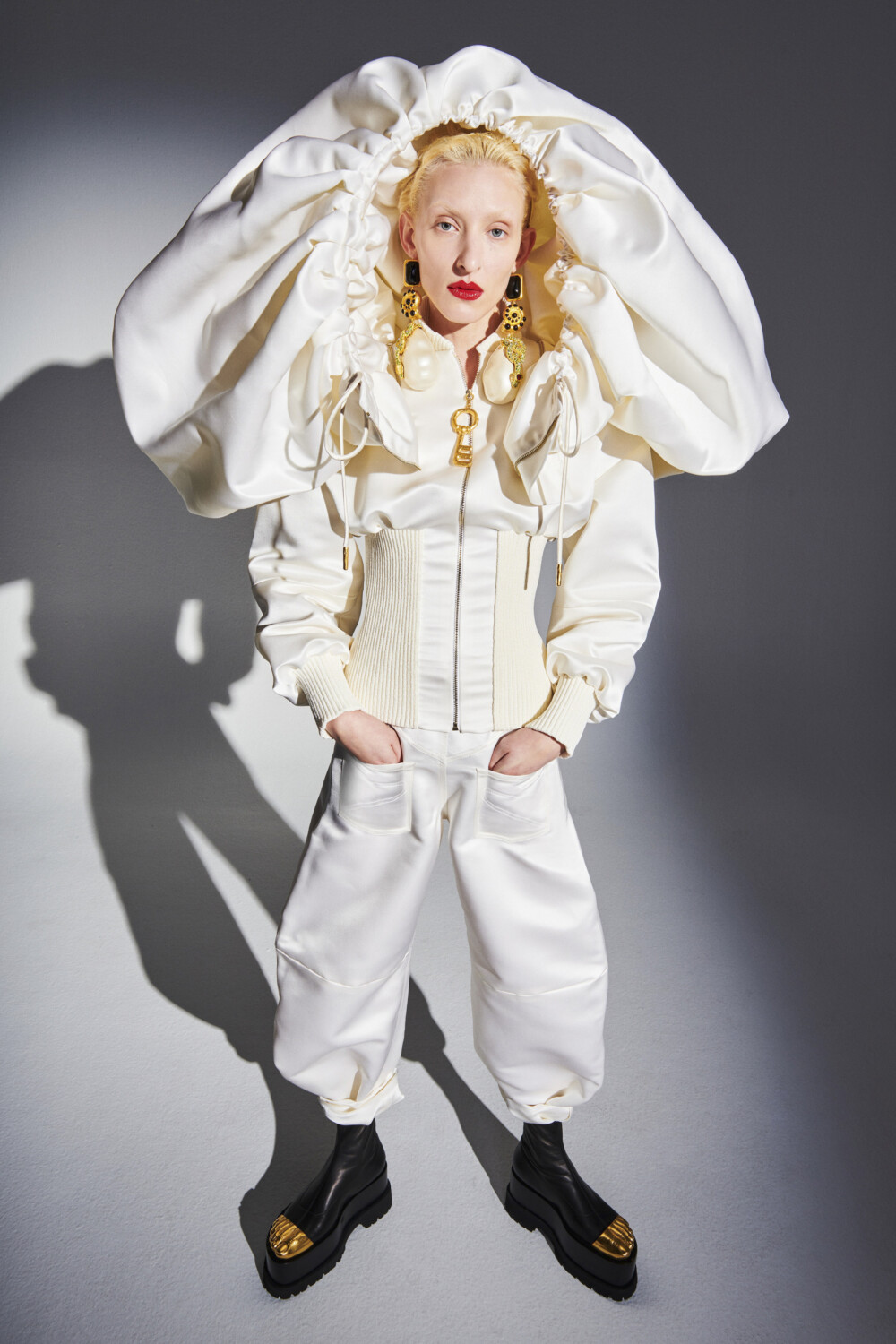 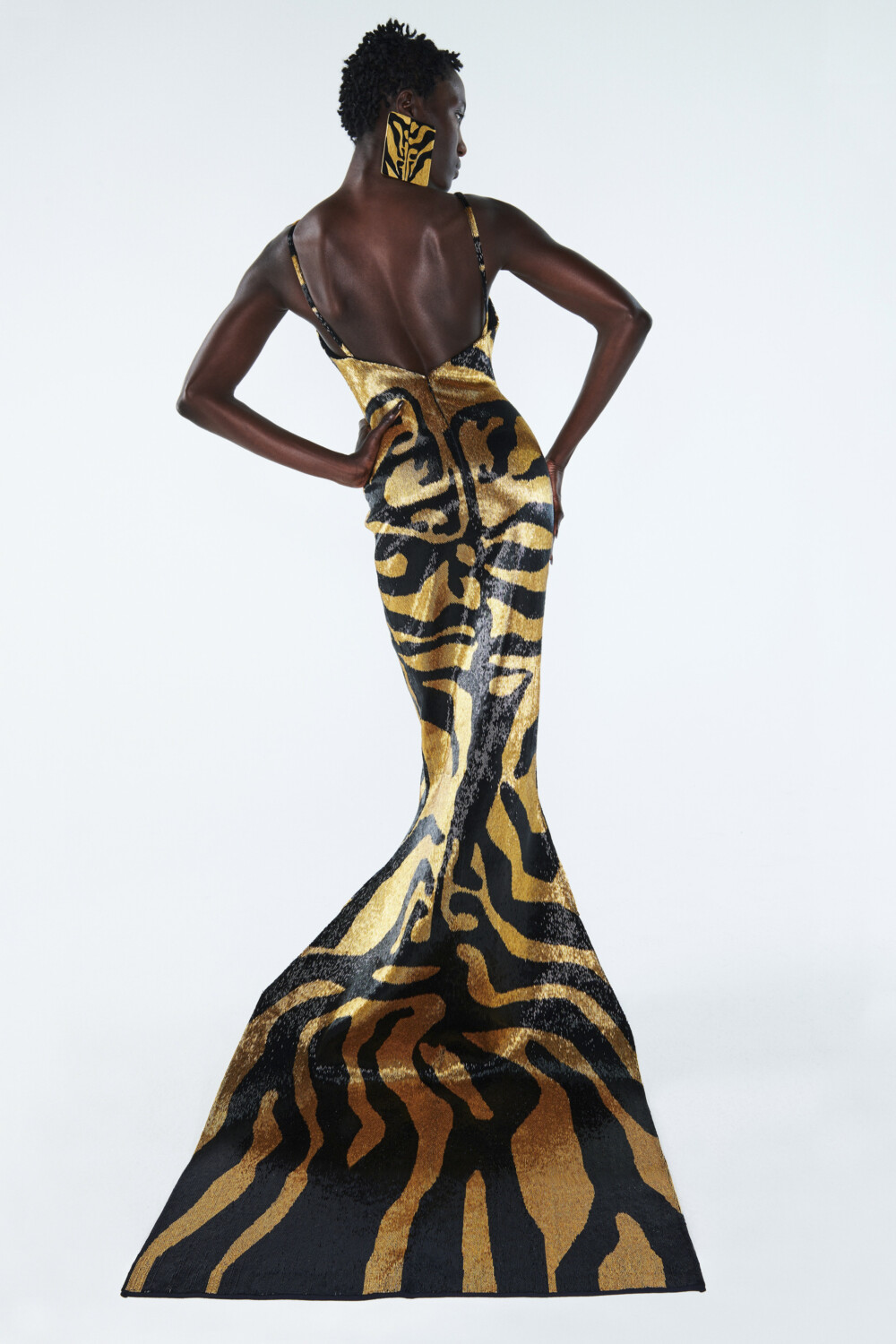 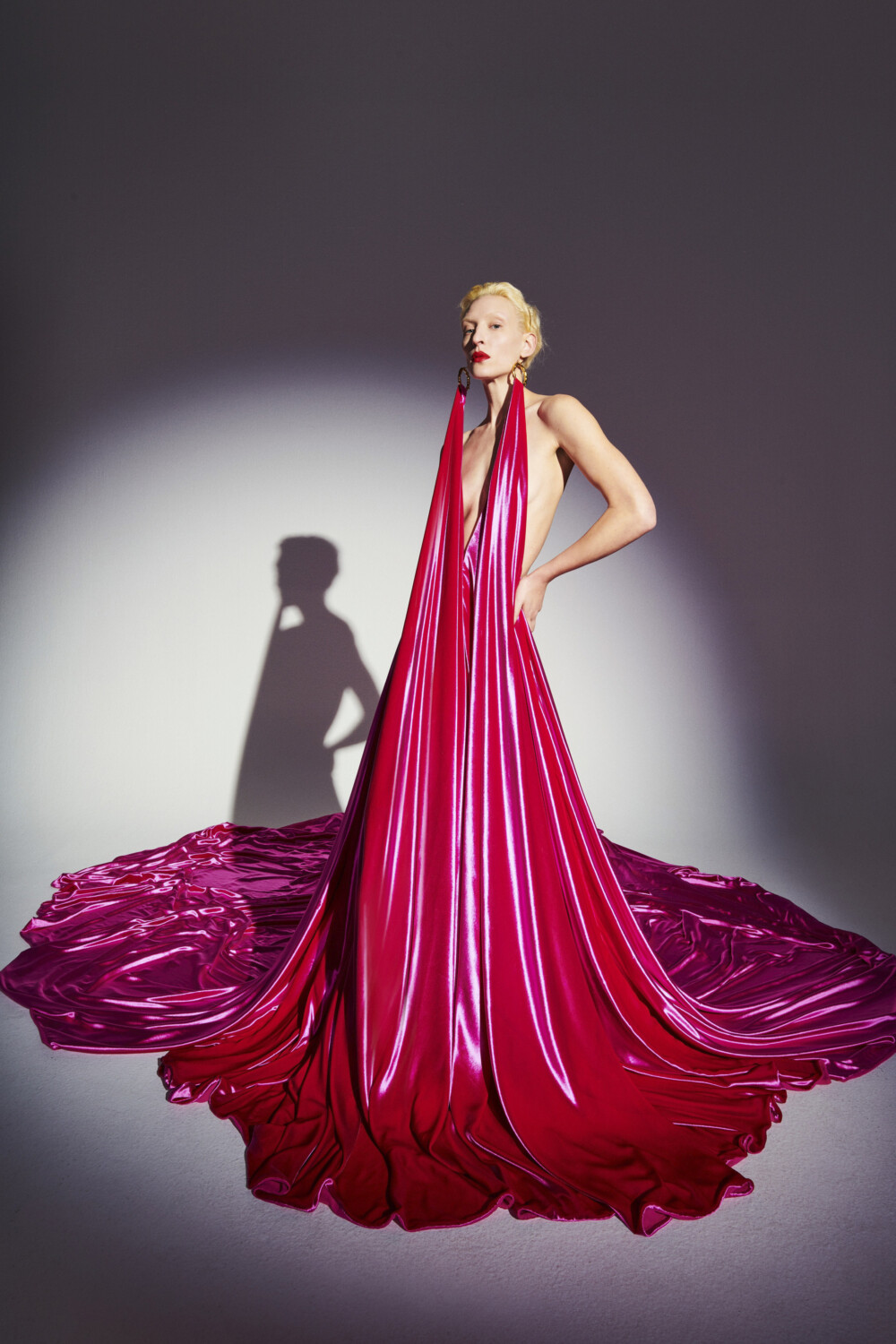 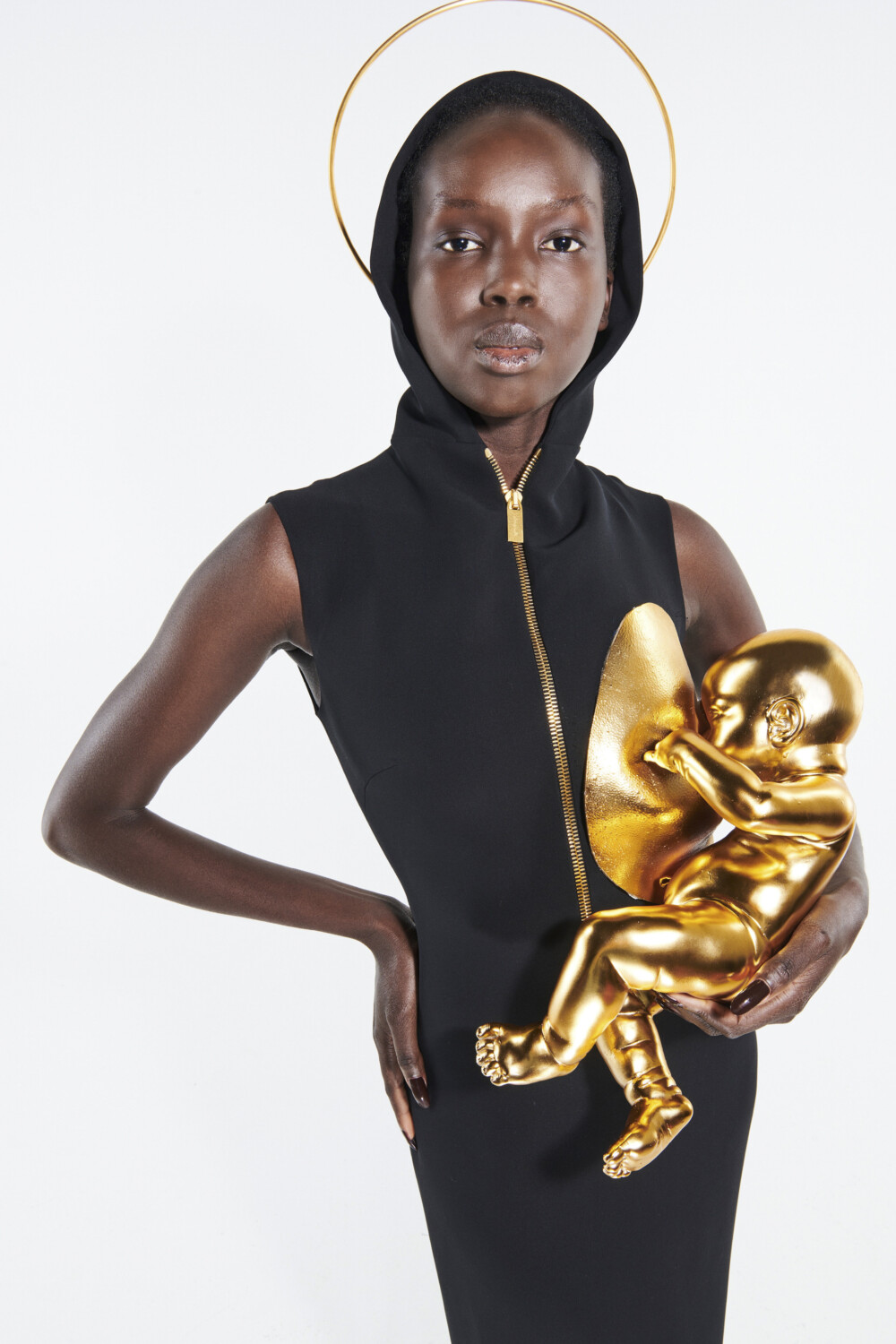 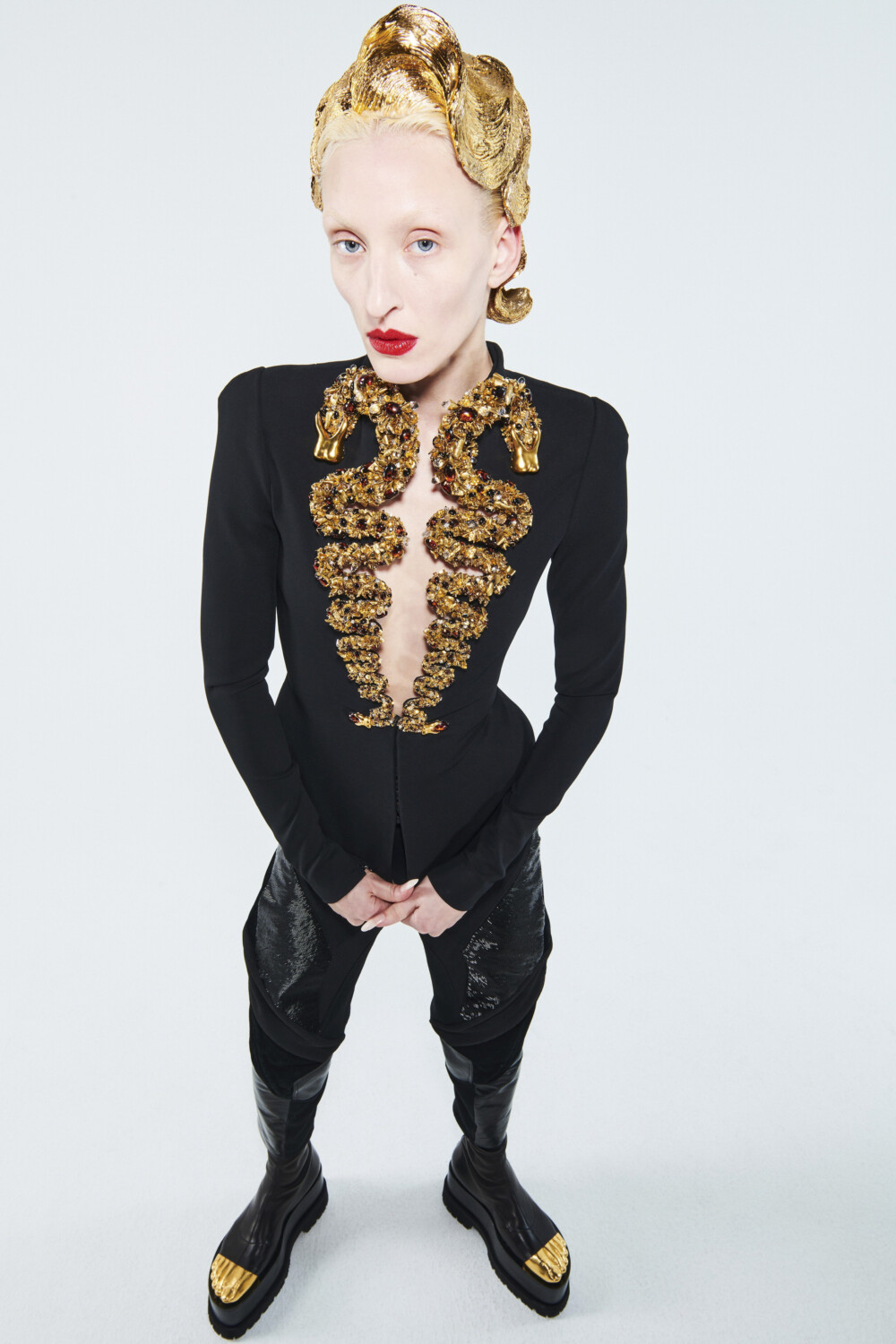 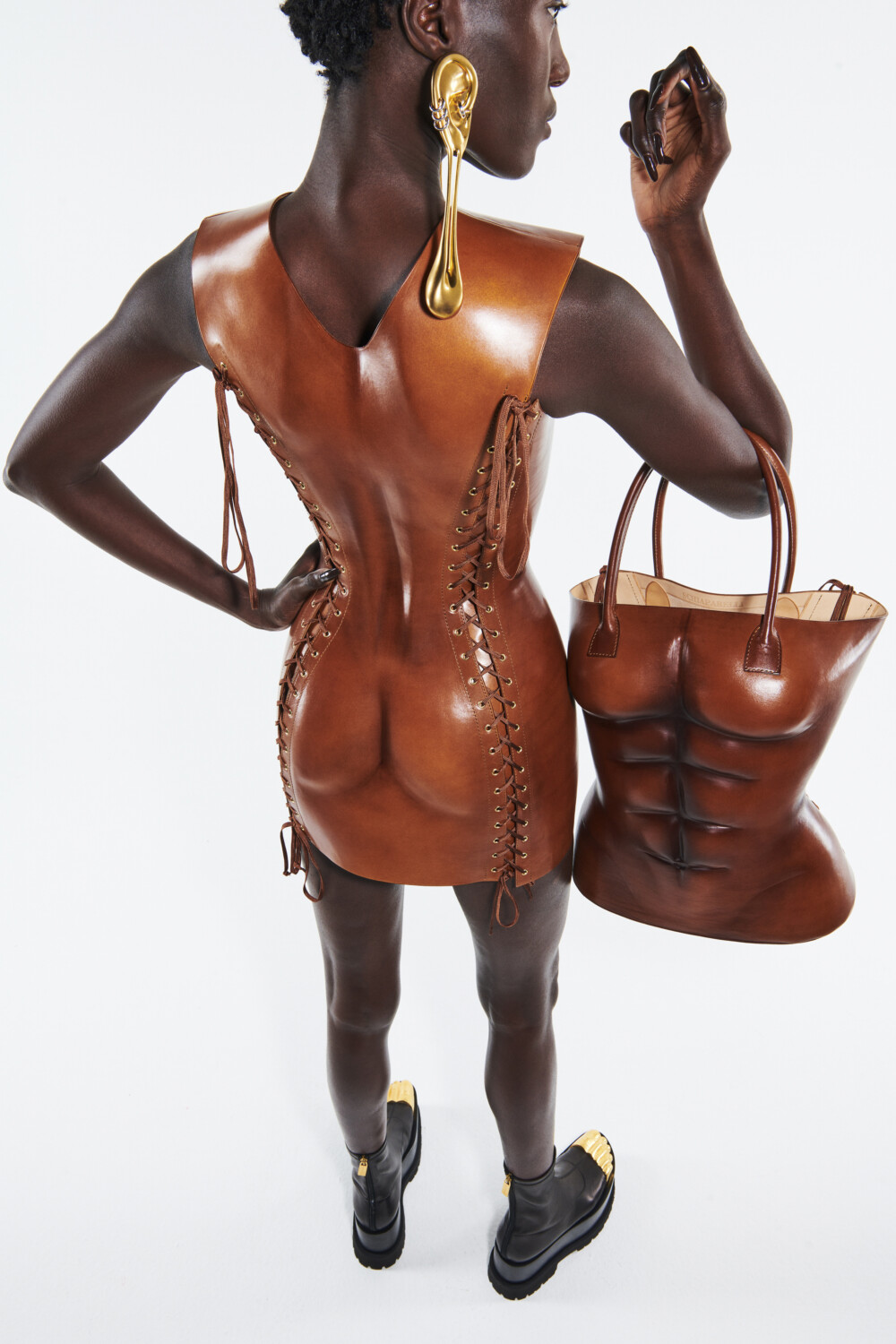 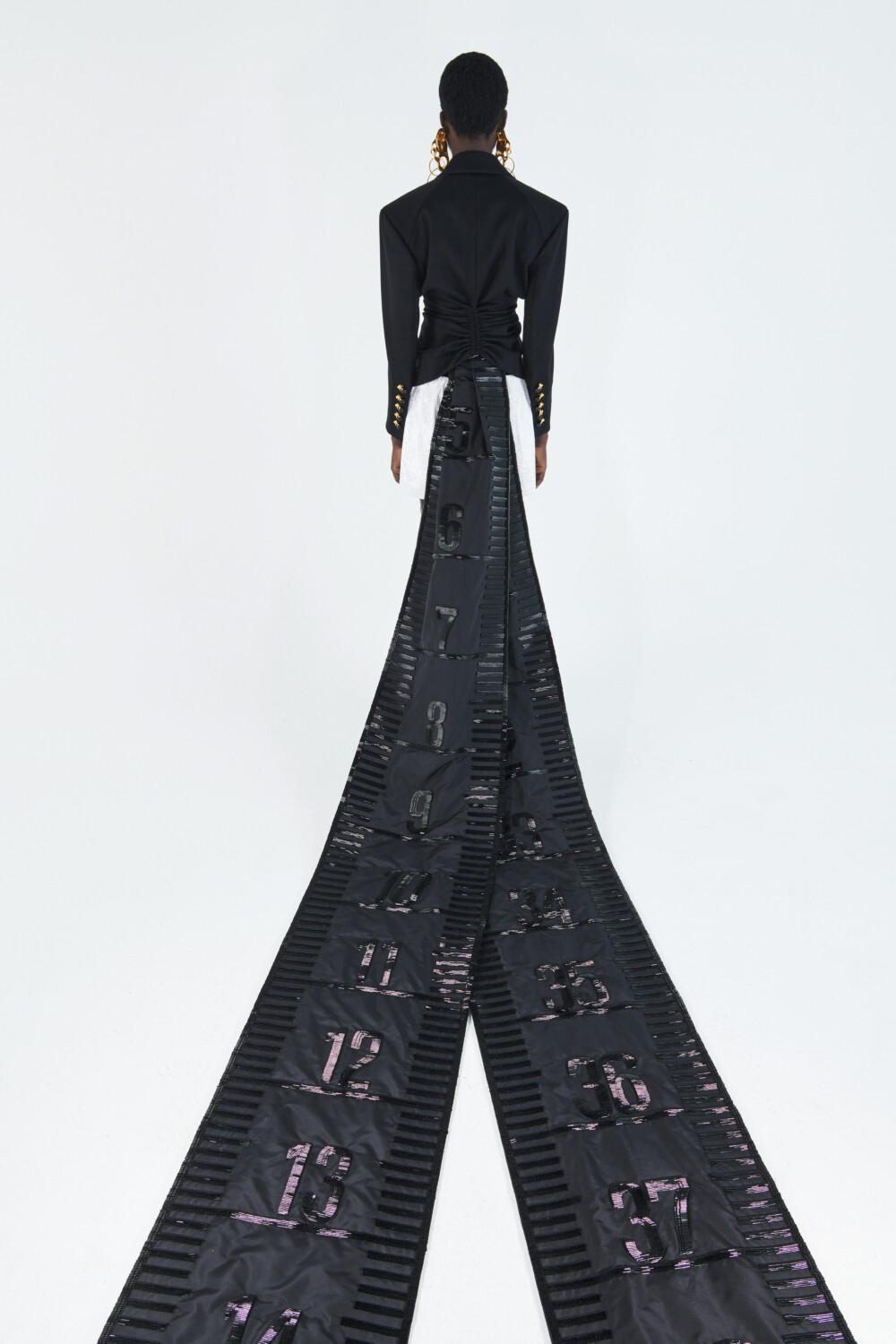 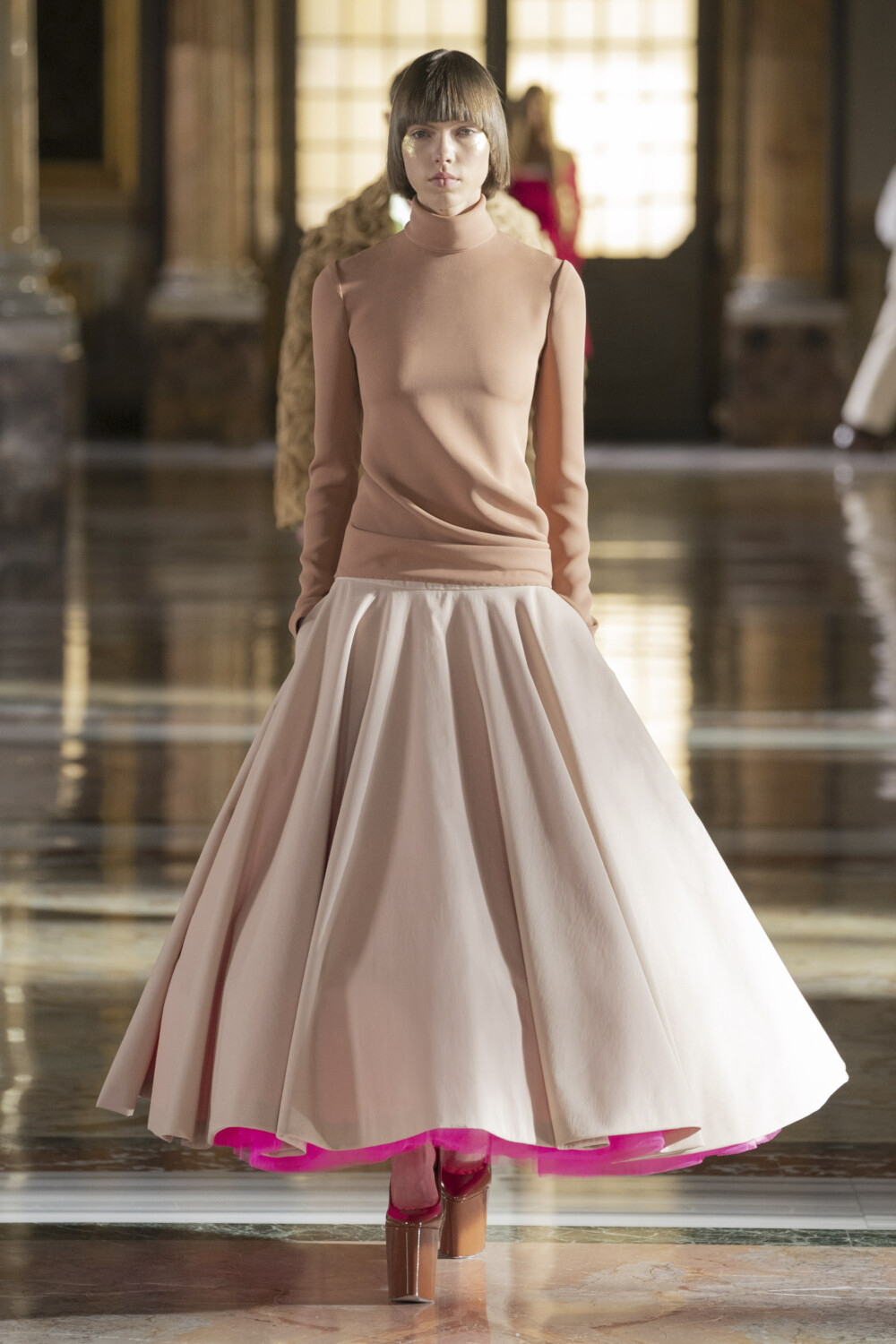 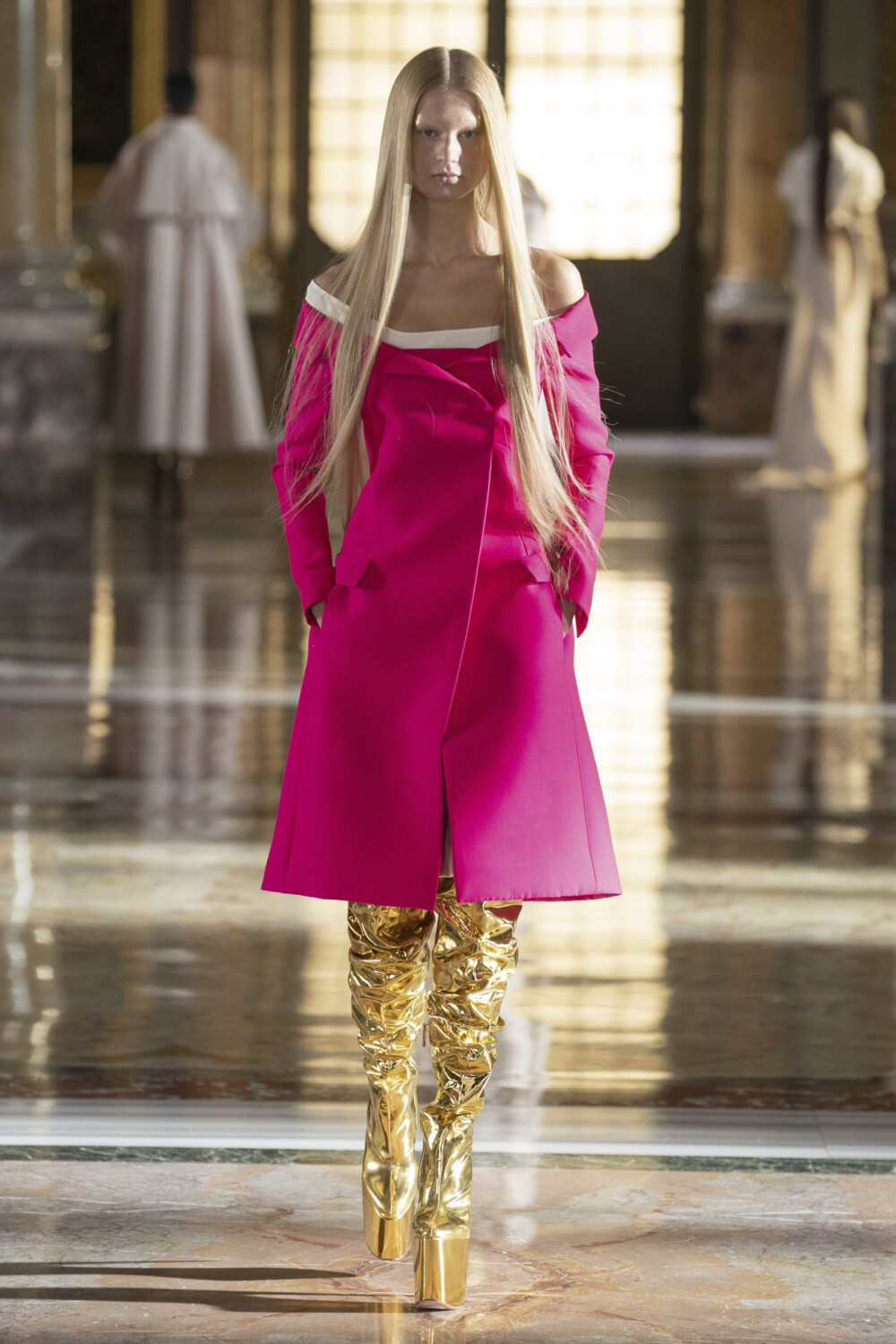 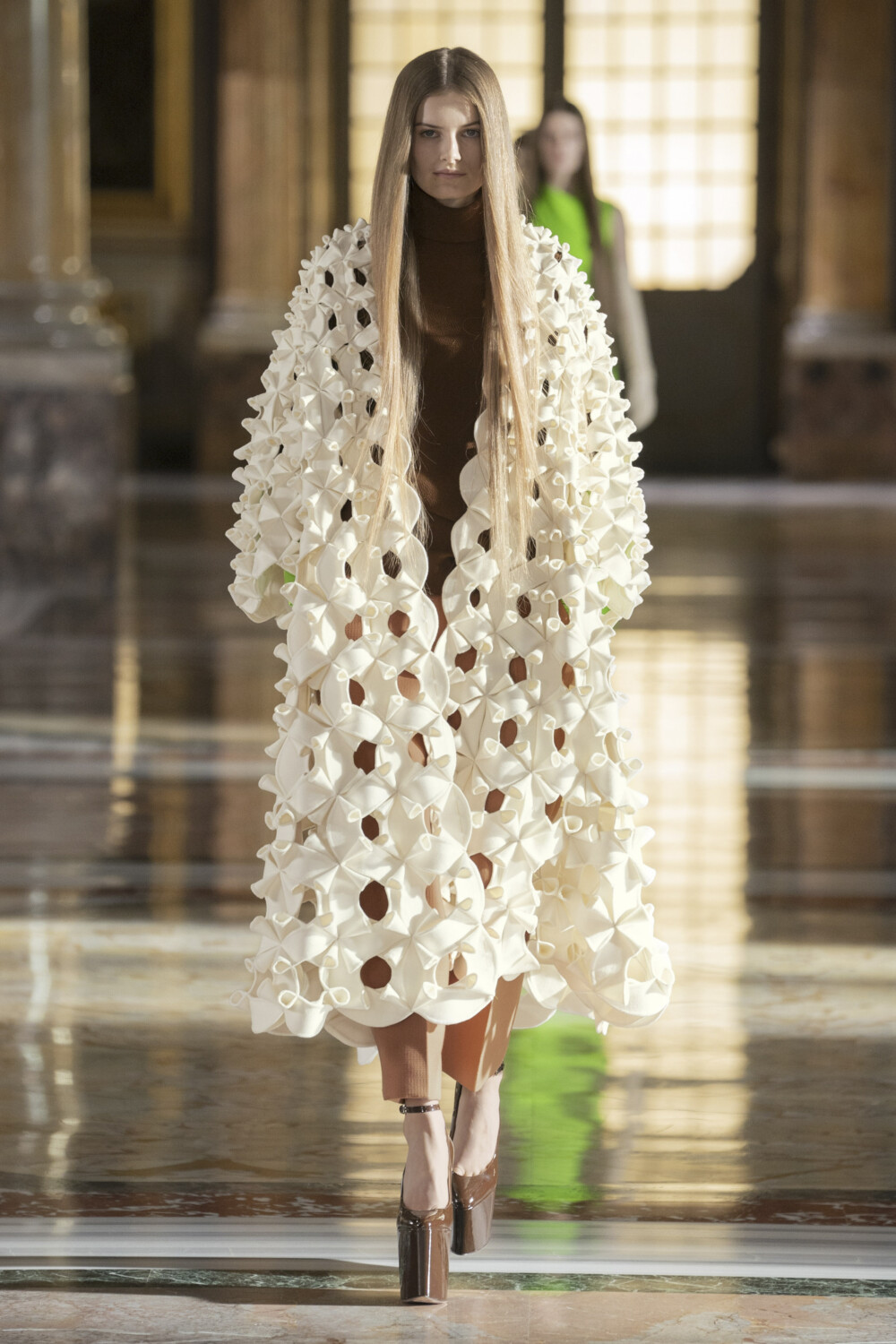 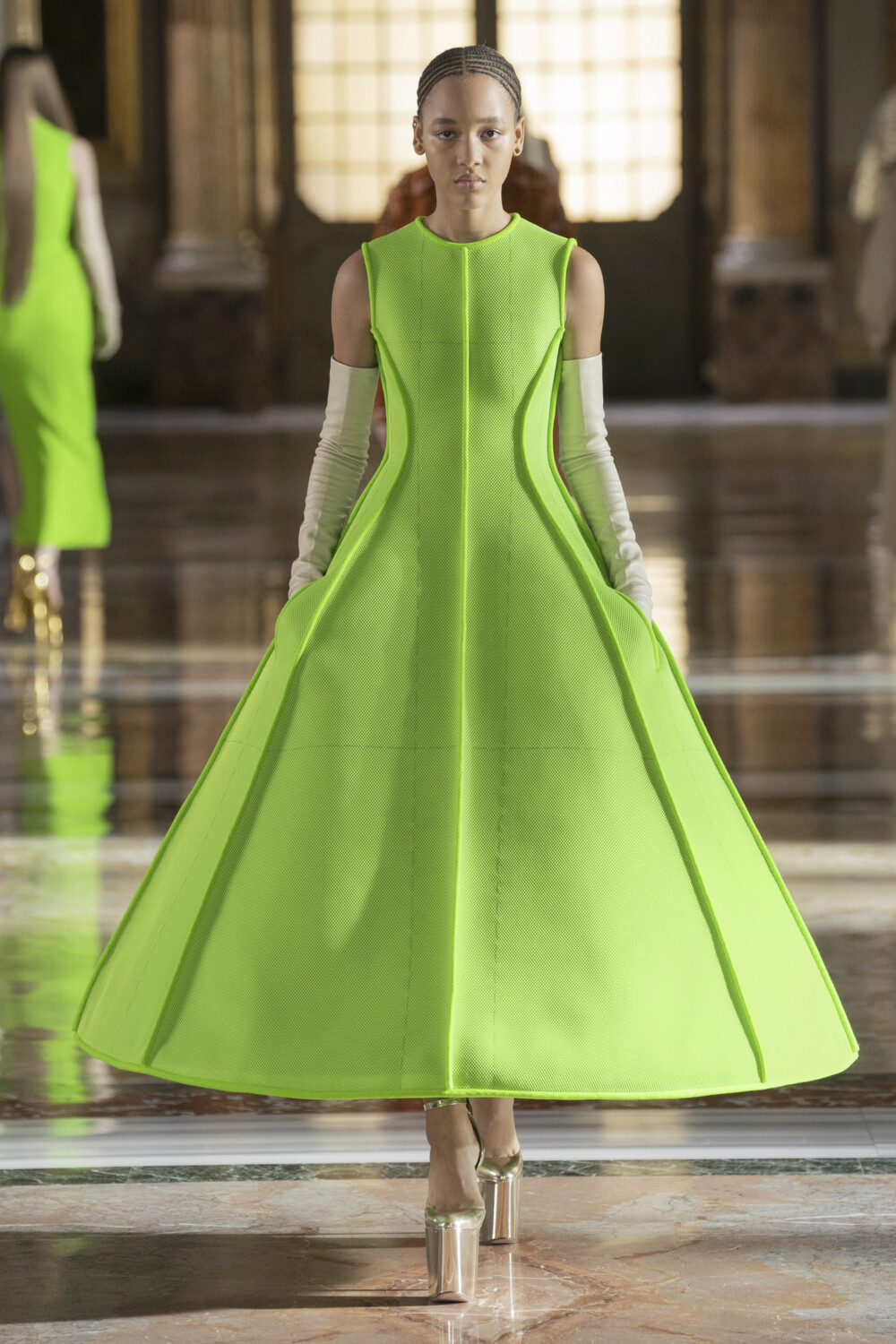 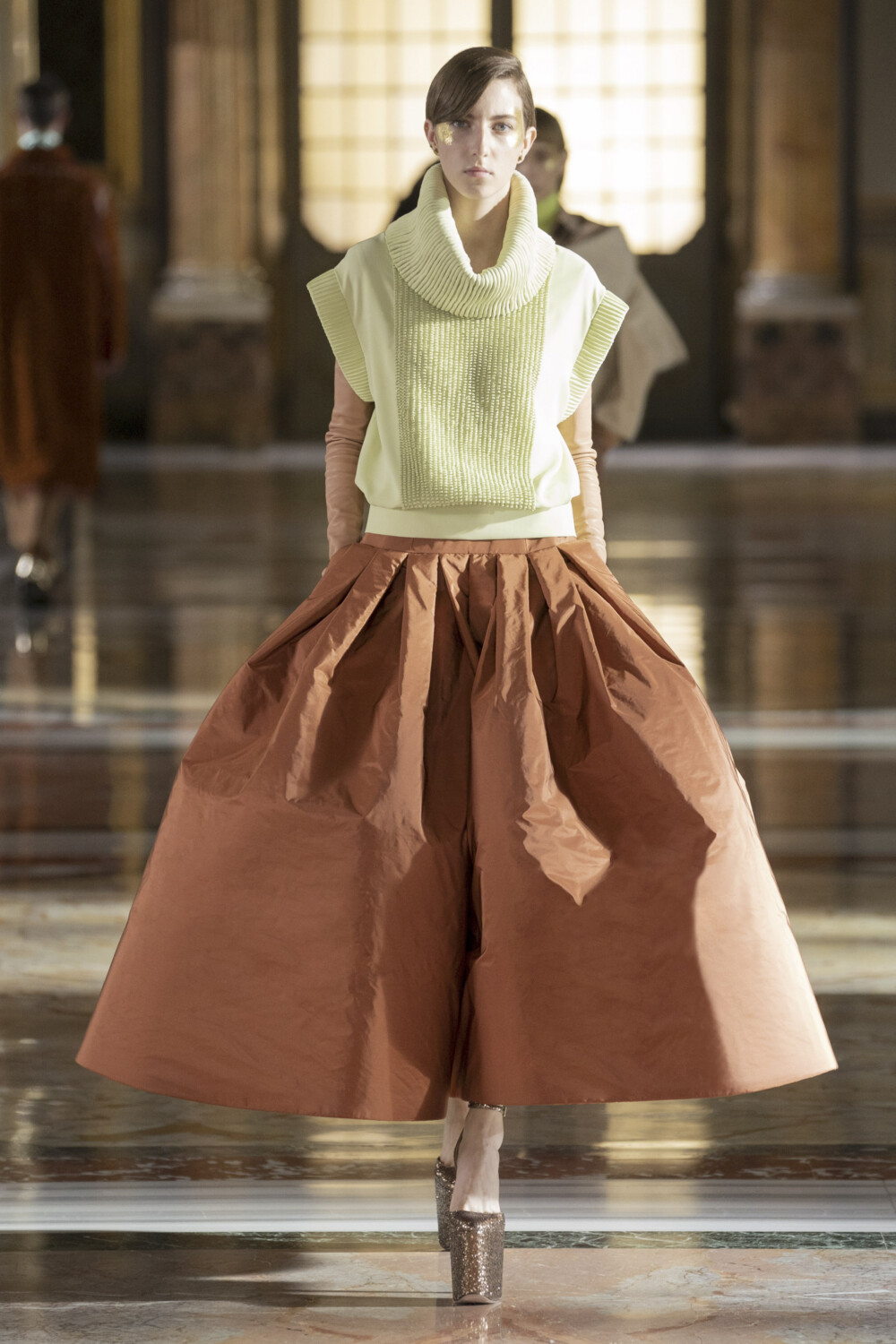 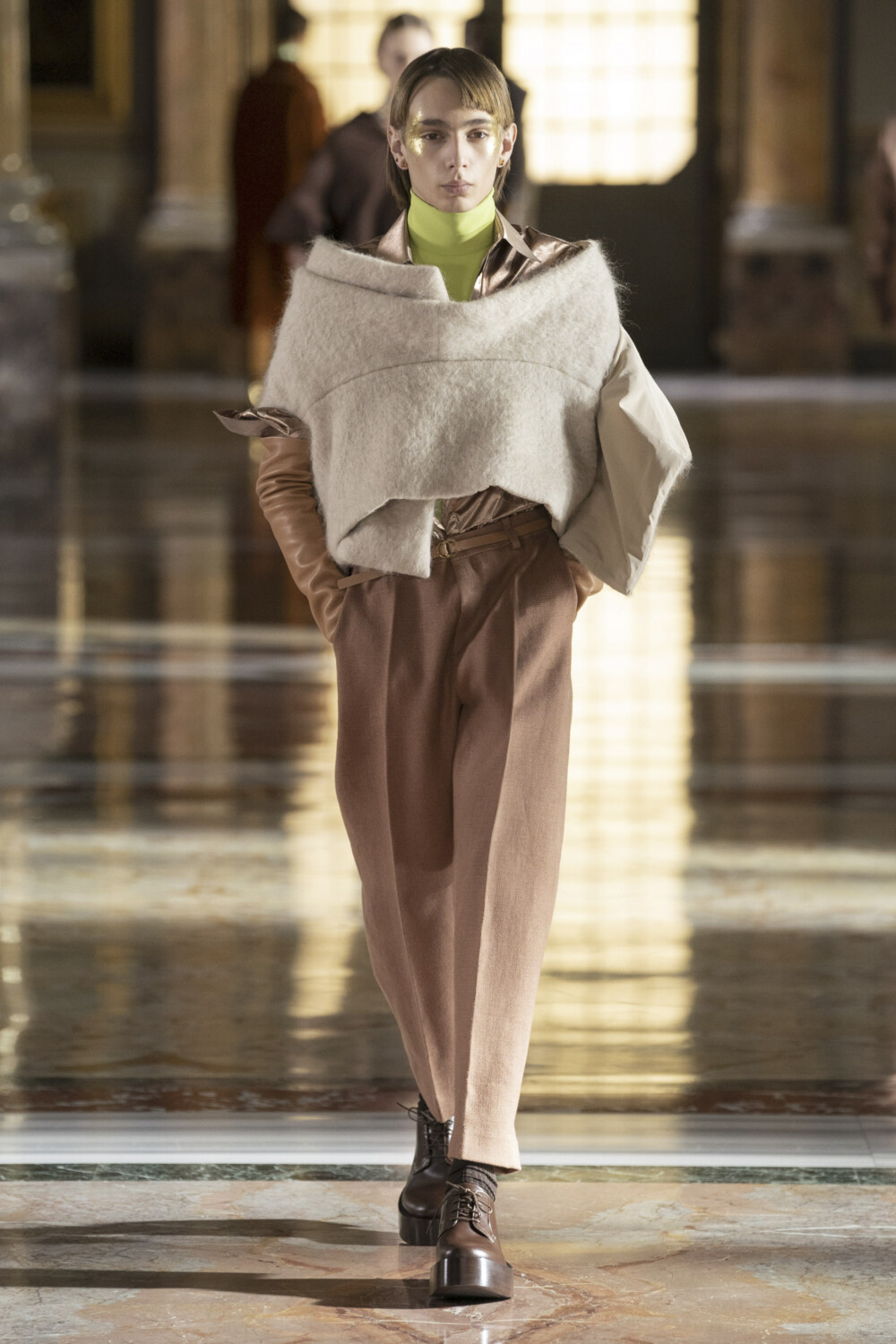 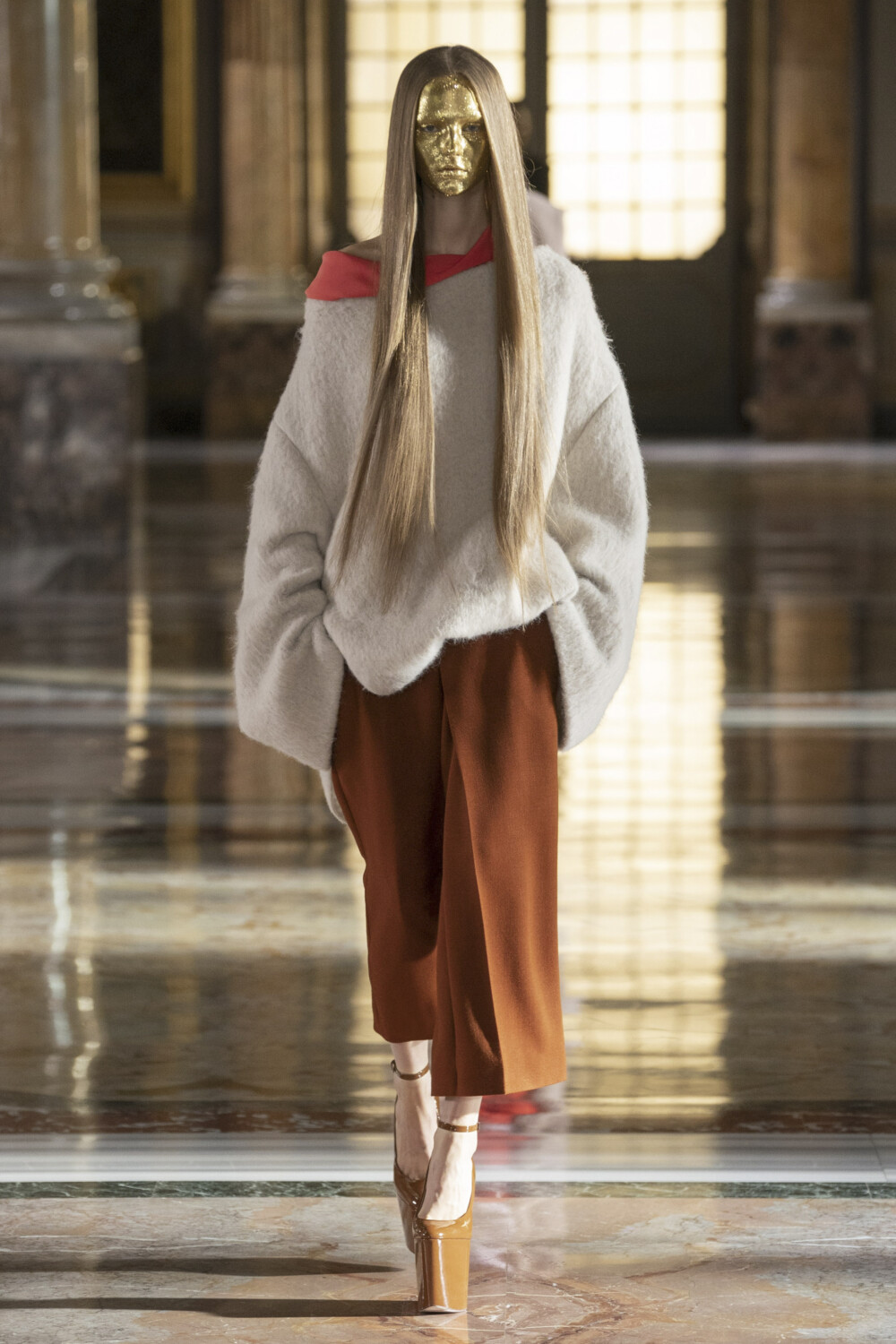 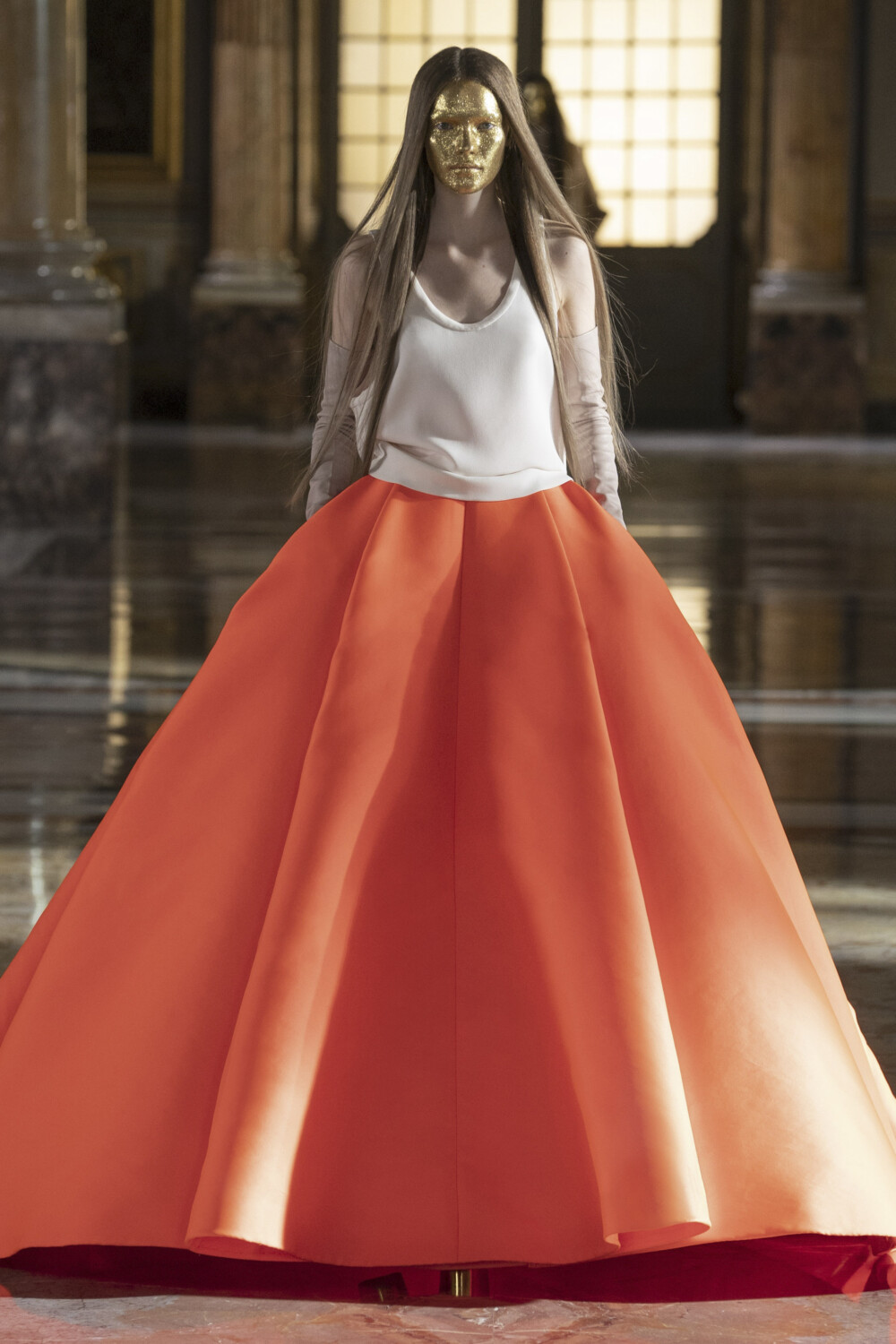 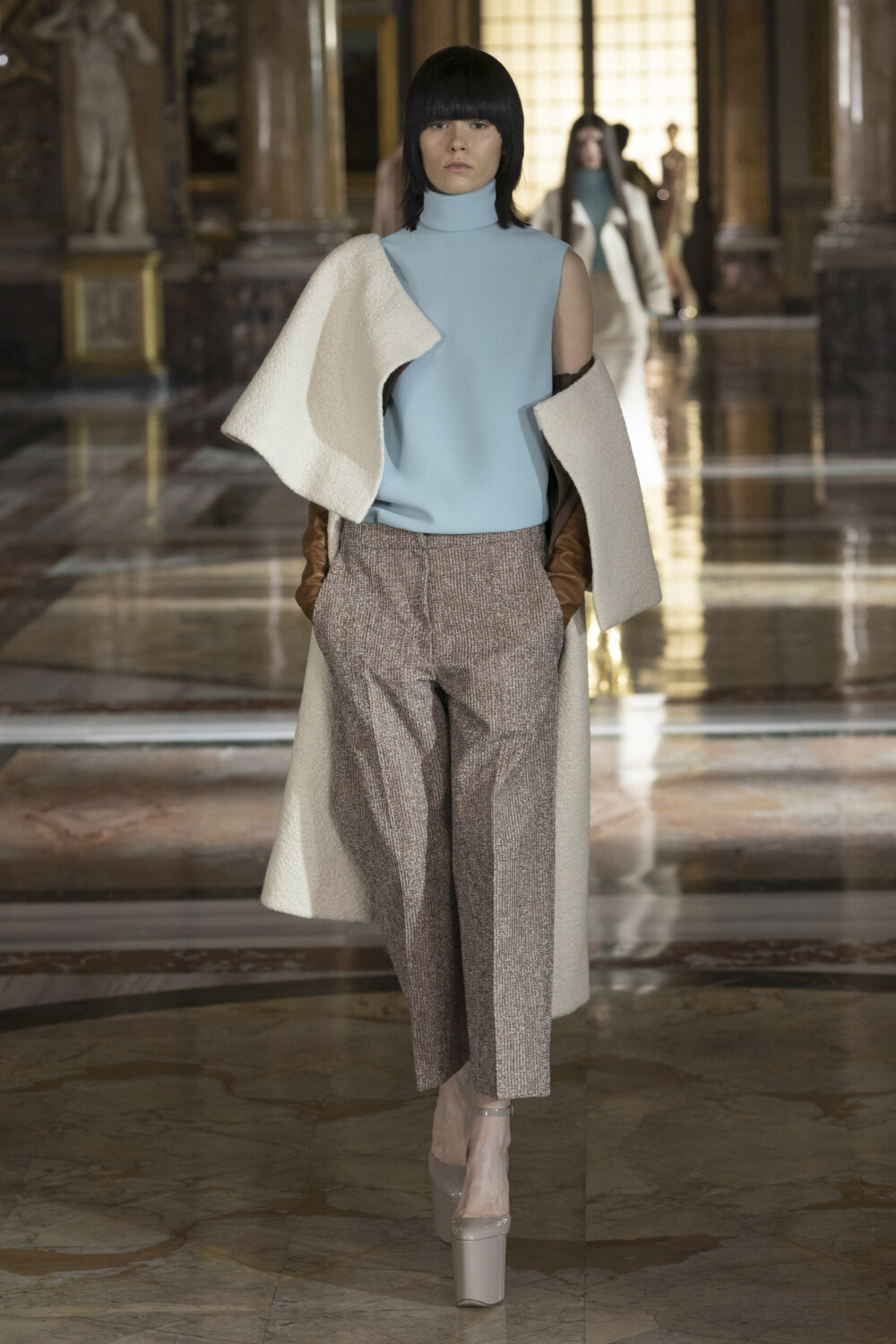 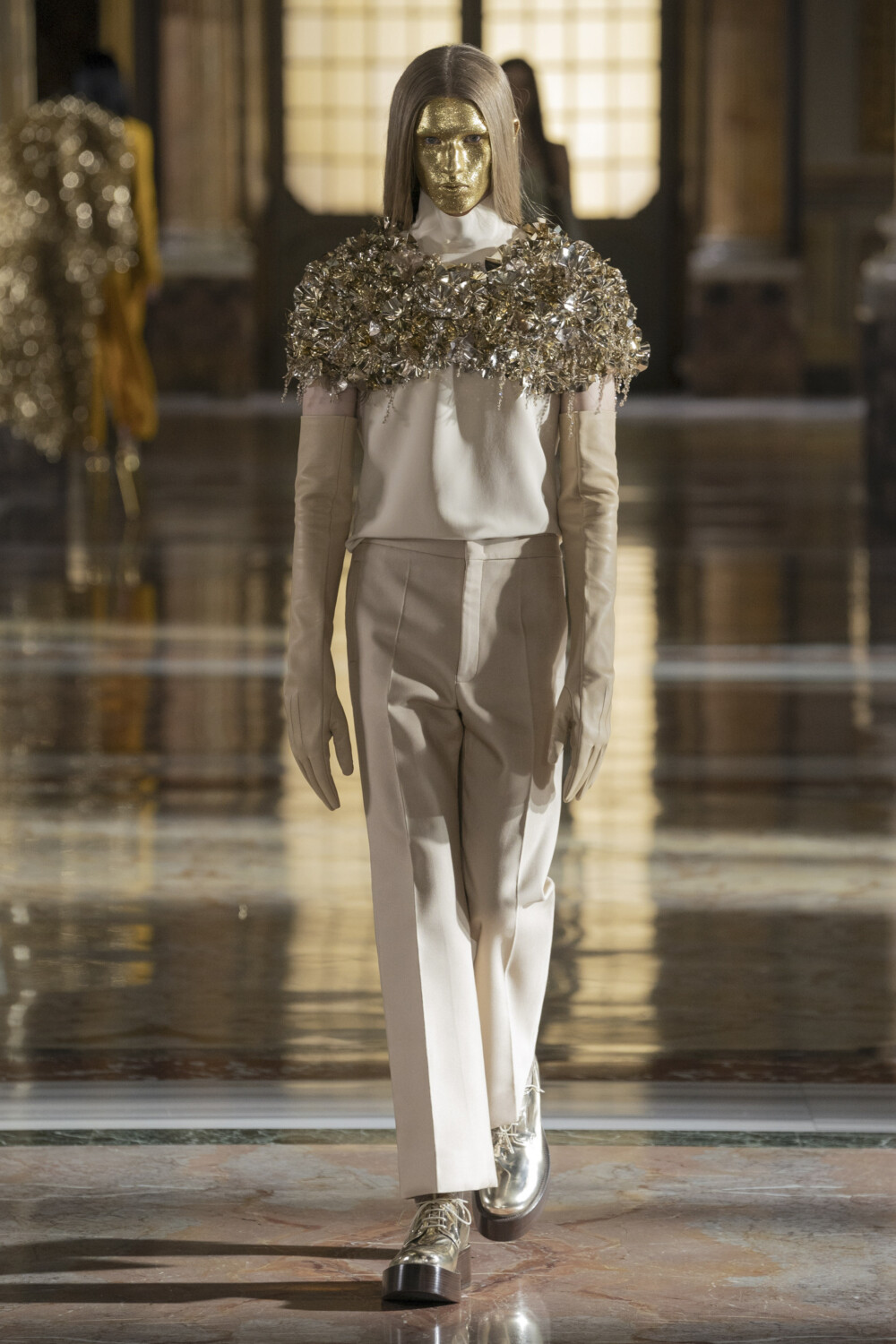 Thinking about the word “Couture” led Daniel Roseberry to extensively challenge the popular idea of what Couture is, and should be. Schiaparelli’s visionary artistic director proves once again to embody the perfect successor of Elsa’s legacy since, in full respect of the irreverent tradition of the French Maison, he explodes the clichés associated with the usual, the polite, the predicted and – for next season – the gender-based as well.

He started by discarding the usual silhouettes associated with Couture: no more skirts, nor delicate and pretty fairy tale gowns; but he took what is not supposed to be shown in this context, such as trousers and bomber jackets.

“(…) These are clothes that make you aware of the fact of your body, that make you think about how you move through the world”, states the beautifully-written note by Roseberry himself. Molded leather is given the appearance of metallic bustiers, shaping the man’s sculpted silhouette on a woman’s body; knitted structures are cleverly nestled into bomber jackets to cinch the waist and deviate the volume to the shoulders; a pair of denim jeans is reimagined in stonewashed silk duchess and embellished with dangling gold padlocks. 3D crystal-embroidered snakes are about to take on a life of their own from the lapels of a jacket; a sinuous silk jersey gown with a meters-long train is held up by a pair of earrings.

The techniques used and the fabrics are all equally disruptive and unpredictable, often referencing also many of the codes and looks invented by the founder herself, like the padlock, reimagined as a hard-shell minaudière; or the measuring tape transformed into an exaggerated, embellished silk faille train.

At Valentino, Pierpaolo Piccioli also questions the classic rituals and processes of high fashion, updating his idea of Couture through garments designed to express oneself, as anyone desires.

He calls it “recoded Couture” in the fashion notes of the House: in fact, Piccioli’s fashion bewitches, astonishes and floors, since it is not something we expect to see on a traditional Couture catwalk. Deprived of every evident ornament, of prints and embellishments, extreme aesthetic subtraction takes centre stage, conveying everything except romantic, sensitive, “human” feeling, but more of cold, silent detachment.

Monochromatic, long, towering silhouettes, developed through regal capes and seconde peau dresses, leave room to acrylic glares and fluorescent chromatisms that range from shocking pink to green to orange, often declined in turtlenecks peeking out from more neutral-hued outfits. Deconstructed coats suddenly open up entirely revealing unconventional structure. There is no lace, chiffons, or intricate embroideries for the princess-cut dresses and full skirts, but technical scuba and net-like fabrics – stolen from the sportswear field – translated in fluo colors and combined with street-derived garments like tank tops and sleeveless hoodies. That of Valentino is definitely a “code that regenerates itself endlessly while remaining timeless”.